The 11200 Capacitor Leakage Current / IR Meter is mainly used for electrolytic capacitor leakage current testing and aluminum-foil withstand voltage testing (EIAJ RC-2364A). The 11200 can also be used for active voltage checking or leakage current testing of absorber, Zener diode, and Neon lamp etc. With the standard RS232 interface, optional GPIB & Handler interfaces, high speed and stable measurement capabilities, the Chroma 11200 can be used for both component evaluation on the production line and for fundamental leakage current or IR testing for bench top applications.
Get Datasheet
Add to Quote

Capacitor leakage current is defined in standards. In general, the leakage current is after charged (the Chroma 11200 is using 98% for identity) plus a period time (for example 60 sec. ±10 sec.). Chroma 11200 provides a semi-constant-power discharge circuit for quick discharge after testing. Therefore, selecting [SEQuence] test mode for this application is recommended. It will follow the preset time to charge, test and then discharge. After that, it will display the tested result and judge pass/fail.

On the automatic production line of electrolytic capacitors, generally, several pre-charging station are built with a current limit series resistor in each station. When set the meter in [STEP] test mode, TEST status, measure the leakage current via an external trigger. Chroma 11200 provides up to 500mA (below 100 volts) large output current and low noise voltage source which can be used as charging and testing voltage source. The tested result will be displayed including pass/fail judgment. In addition, it can be controlled through the GPIB interface and handler interface for automation.

Chroma 11200 has built-in RS-232 interface which can be used in R&D or QC for remote control and tested data fetch. Additionally, GPIB & handler interface (A110235) are optional for automation. LCR What Voltage and Current is Applied to the Unknown 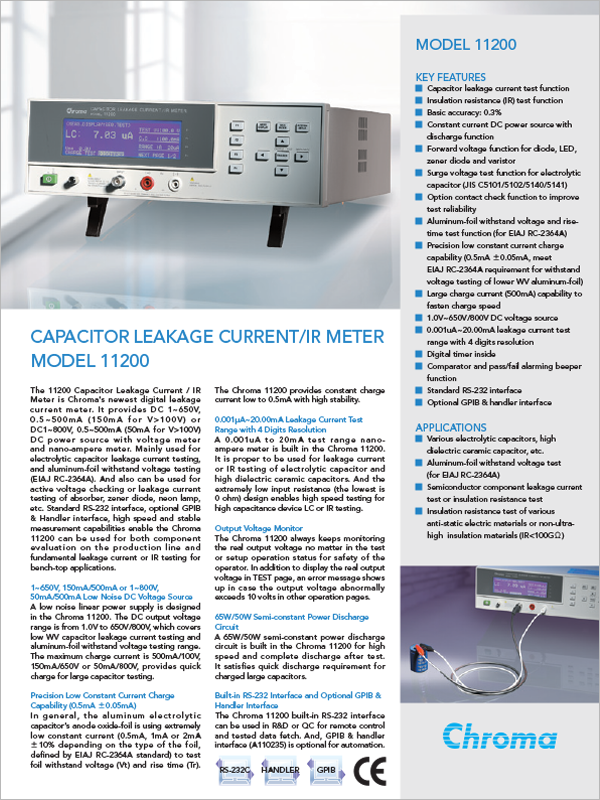 Programmable test signal level settings are from 10mV to 1V in steps of 10mV, and the VM/IM signal level monitor functions allow you to evaluate your devices at the level you specify
explore

Complete this form and a sales engineer will quickly follow up with you.